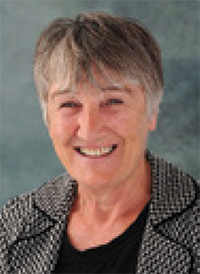 Exciting people about research is a key part of Professor Joan Webster’s job. As Nursing Director of Nursing and Midwifery Research since 1991, Joan has overseen dozens of research studies and trained many nurses in evidence based practice.

“We offer a 12-week course that teaches people how to conduct a systematic review, how to develop a question of their choice, how to read the literature and tell good studies from bad, and importantly how to identify evidence gaps,” Joan says.

The research centre’s biggest program of research is around intravenous access. Up to 40 per cent of catheters fail before treatment is complete. With almost every inpatient needing an IV line, understanding what makes them fail has the potential to improve patient outcomes and experience in hospital.

The Nursing and Midwifery Research Centre has conducted three trials of catheter dwell times, the largest of which examined 5000 catheters and found there was no difference in the failure rate of catheters that were left in place until there was a clinical indication to remove them versus those which were replaced routinely every three days.

“We received funding from the NHMRC for the SAVE  trial which compared four types of dressings to secure catheters, including superglue, and there was still no difference in failure rate,” Joan says. “We also have a study underway looking at the effect on vein walls of flushing catheters after administering drugs.”

One of Joan’s Cochrane reviews was the stimulus for a  current study, which is investigating the effectiveness of negative pressure wound therapy (NPWT) for women who have had Caesarean section births.

“We have four hospitals randomly allocating prophylactic PWT or a standard dressing to the wound following surgery. It’s the largest trial in the world looking at NPWT,” Joan says.

Joan hopes that results of the trial will provide the best evidence about whether NPWT reduces the risk of infection. The trial also includes an economic analysis,
to assess the implications of using a significantly more expensive dressing. While Joan has the only permanent research position in the Centre there are about 16 nurses from across RBWH working on various projects. There are also two joint professorial positions with QUT and RBWH, Fiona Coyer and Theresa Green, who focus on intensive care and neurology research respectively.

“Most of our work comes from clinical areas where nurses and midwives identify issues and raise questions for research,” Joan says.

“Research is important to clinical practice. It’s my job to get people excited about research.”