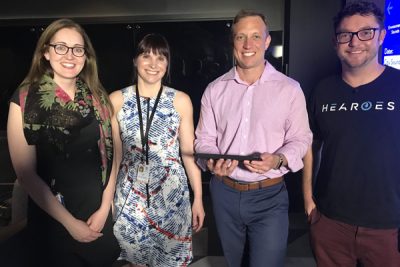 Audiologists at Royal Brisbane and Women’s Hospital (RBWH) have helped in the development of an Australian-first app that guides hearing impaired people through the new environment of sound, following a hearing implant.

Minister for Health and Minister for Ambulance Services Steven Miles said the innovative Hearoes app was the first game-based offering of its kind.

“Users can now swap out some of the traditional homework models like CDs and workbooks, to learn how to turn sounds into meaning according to their unique learning style, and at their own pace,” Mr Miles said.

“We’re really proud to have supported the development of Hearoes through eHealth, which will revolutionise the onboarding process for patients and provide an accelerated learning journey.”

RBWH Audiology Team Leader Carla Rose said switching on a cochlear implant was just the first step in a long and often frightening journey, even for those who’d lost hearing in their later years through an accident or degeneration.

“A hearing implant is not going to replicate natural sound, so it’s a new experience for every patient, no matter the circumstances behind their hearing impairment or previous hearing level,” Ms Rose said.

“Sound alerts us to our everyday environment including potential harm, and it’s a huge challenge to work out what even the most dissimilar sounds mean, such as a car backfiring and a child laughing.”

Patients also find they have no concept of things like sarcasm, where the words can appear the same when relying on techniques such as lip-reading but can sound different due to inflection or intonation.

“It’s wonderful to see the excitement when a cochlear implant is switched on for the first time but in reality, it can take anywhere between three months and a couple years to learn how to interpret the myriad sounds patients suddenly find themselves trying to navigate,” she said.

Brisbane-based app creator Elliot Miller received a cochlear implant in December 2013 after a lifetime of deafness but found there were few tools to help him learn at his own pace.

He started developing what would become Hearoes after hearing a strange noise while jogging, which stopped every time he did. It turned out to be coins jangling in his pocket.

“Getting a cochlear implant is like being given the keys to a really fast car, with absolutely no idea how to drive it,” Mr Miller said.

With the support of eHealth, Elliot was able to call upon fellow cochlear recipients and doctors, RBWH audiologists, speech therapists and teachers to progress the app through a fully-funded, 90-day proof of concept and is considering pilot testing.

“People who are born with fully functioning hearing also learn to filter extraneous noise very early on, but that’s not the case for people who are coming to terms with sound as a completely life-changing event, and in many cases hearing sound for the first time,” he said.

The Hearoes app is currently available on iTunes and Google Play and is now being rolled out for use at RBWH Audiology.