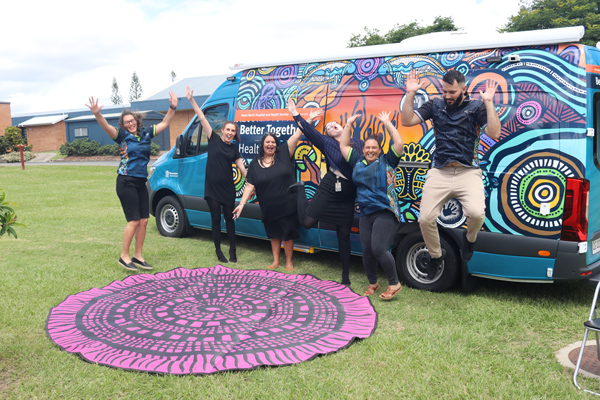 A new Better Together Health van unveiled today is set to provide more convenient access to health care information for members of the Aboriginal and Torres Strait Islander community in Brisbane’s north.

“Between 2011 and 2016, the Aboriginal and Torres Strait Islander population residing in the Metro North region increased by 37.6 per cent, compared to 18 per cent nationally. By 2031, the Indigenous population in South East Queensland is projected to be 133,189, the largest of any other State’s population projection,” Ms Holzapfel said.

“The introduction of the Better Together Health van will allow Metro North to deliver health promotion and education, clinical service delivery and engagement activities for Aboriginal and Torres Strait Islander people to improve health outcomes and contribute to closing the gap on life expectancy.”

The van features colourful artwork by esteemed Aboriginal Artist Elaine Chambers-Hegarty and an awning where community members can have a yarn with an Aboriginal and Torres Strait Islander Health Worker and experienced health staff.

Ms Holzapfel said the initiative was responsive to community needs based upon feedback gathered as part of the new Better Together Aboriginal and Torres Strait Islander Health Plan 2019-2022 launched in July 2019.

“The van is a long-term commitment for Metro North and will provide a one on one chance for community members to informally yarn with a health care provider on issues such as hospital experience and support co-design initiatives,” she said.

“For the next six months, the van will be out and about attending community cultural gatherings, Elders groups and health events to gain valuable feedback on the health service needs and requirements.

“Indigenous specific health programs will be the first to utilise the service as they already have a well-established connection within the community.”
It is anticipated the van will be available as a clinical resource to other areas in Metro North such as allied health, maternal and child health, oral health and sexual health.

Find out more about the Better Together van on Facebook via @BetterTogetherHealthVan.