The first public hospital in Brisbane, the Moreton Bay Hospital, was established on 12 January, 1849 near the site of the present Supreme Court buildings in George Street. It served a vast area comprising the districts of Moreton, Darling Downs, Wide Bay, Burnett and Maranoa. In its first year, 94 patients were treated and the total expenditure for that year was 370 pounds.

By 1856, other hospitals had been established away from Brisbane. As a result the name of Moreton Bay Hospital was changed to the Brisbane Hospital.

A new hospital was built on the RBWH’s present site at Herston, then known as the Quarries. The patients were moved from the hospital in George Street to the new Brisbane Hospital on 8th January, 1867. The first nurses graduated from the hospital in 1888 and in 1939, the University of Queensland Medical School was opened adjacent to the hospital. Since that time, the hospital has provided training for thousands of doctors, nurses and allied health professionals. The Royal Brisbane Hospital was so named in 1966 and has become the major teaching hospital for Queensland.

The first women’s hospital began in 1864. It was called the Queensland Lying-In Hospital and was located in Leichhardt Street, Spring Hill. In 1867, the hospital was renamed the Lady Bowen Hospital after the wife of Queensland’s first governor.

Towards the end of 1929, it was agreed to build a new maternity hospital on land adjacent to the Brisbane Hospital at Herston. The then Minister for Health, Ned Hanlon, officially opened the new Women’s Hospital in 1938.

In 1966, Queen Elizabeth 2nd gave permission to use the prefix “Royal” to the Brisbane Hospital and in 1967, the Queen also approved the use of the “Royal” prefix for the Brisbane Women’s Hospital. (Patrick, R., 1988).

Following years of strategic planning and a multi million dollar redevelopment program, The Royal Brisbane and Royal Women’s Hospitals were amalgamated to become the Royal Brisbane and Women’s Hospital in 2003. Initially there were two divisions within the Women’s section, the Women’s Health Division and the Division of Neonatology. In 2004, these were amalgamated to become the Women’s and Newborn Services Service Line.

Today, the Royal Brisbane and Women’s Hospital is a 1000 bed quaternary and tertiary referral teaching hospital with a number of specialities including medicine, surgery, orthopaedics, psychiatry, oncology, trauma, obstetrics, gynaecology, gynae-oncology, urogynaecology, neonatology and community based / client oriented education services and women’s health services. The RBWH is the largest tertiary referral hospital in Queensland and provides services to patients from throughout the State, New South Wales, Northern Territory and from neighbouring countries in the South West Pacific. The hospital fulfils a significant teaching and research role with links to Queensland’s major tertiary institutions. 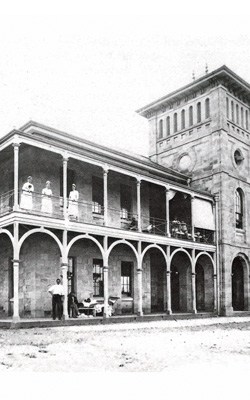