The Prince Charles Hospital (TPCH) Adult Cystic Fibrosis Centre is trialling a breakthrough drug that could allow patients to live decades longer, by turning the acutely fatal disease into a manageable condition.

The breakthrough Triple-therapy CFTR modulator drugs have the potential to revolutionise care worldwide by targeting the cause for the first time rather than managing symptoms – which could effectively stop the disease from becoming fatal for as many as 80% of patients. 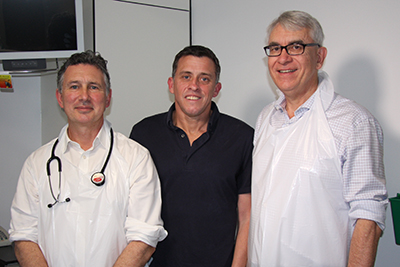 Professor Bell and Dr Ratjen were selected from a pool of experts worldwide, to assess the global health and economic challenges of CF over the next three decades and to provide the blueprint for care going forward.

Professor Bell, who is Executive Director of Research at Metro North Hospital and Health Service (MNHHS) and head of QIMR Berghofer Medical Research Institute’s Lung Bacteria laboratory, said treatment has always centred on the downstream consequences and symptoms such as mucus-clearing drugs and treatments, antibiotics and anti-inflammatories.

“However, recent advances in CFTR modulator therapies to address the basic defect of CF have been phenomenal, making targeted, gene-specific drugs a reality,” he said.

Professor Bell and Dr Ratjen’s team of 38 inter-disciplinary contributors will come together to unveil The Lancet Respiratory Medicine Commission on the Future of Care of Cystic Fibrosis: a global perspective at the European Respiratory Society Congress in Spain on 29 September.

Director of the TPCH Adult Cystic Fibrosis Service and the head of the Lung Inflammation and Infection Laboratory at QIMR Berghofer, Dr David Reid said centre-based care treatments including pharmacological interventions, advances in clinical care and organ transplantation had become relatively standard in high-income countries such as Australia.

“A diagnosis of CF used to be a death sentence by the age of ten, however advances in gene research, diagnostic testing and treatment mean many patients are now living well in to their forties, with those born in the 2000s even set to make it into their fifties,” Dr Reid said.

“The drugs we are now trialling however, could dramatically alter the natural history of this disease worldwide,” he said.

While CF was always thought to be a primarily Caucasian disease, changes in diagnostic testing and advances in newborn screening have revealed that it is similarly prevalent in populations where it was so rare it attracted little to no attention, such as in Southeast Asia and across the African diaspora.

Professor Bell said it was anticipated that China could have the largest contingent of undiagnosed patients in the world, but little to no expertise or treatment options available.

“This is magnified even further for those in developing countries, who have almost no financial capacity to deal with it,” Professor Bell said.

“We could be on the verge of under-recognising, not diagnosing and treating sub-optimally many patients if we don’t collaborate and bring to fruition the blueprint for care that could change the lives of hundreds of thousands of patients worldwide.”