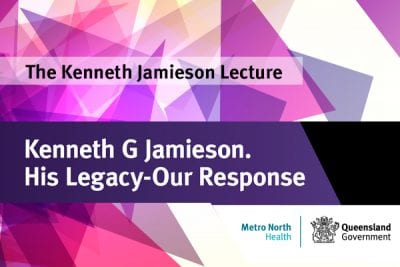 Please join us at this annual Kenneth Jamieson Lecture honouring the work and vision of a brilliant diagnostician and surgeon.

Educated at Scotch College, Melbourne and Ormond College, University of Melbourne – Kenneth graduated with honours and was appointed to the Royal Melbourne Hospital, and subsequently to the Alfred Hospital as assistant to the neurosurgeons.

A research scholar, university lecturer and author, Ken was appointed as the first visiting Neurosurgeon to the Royal Brisbane Hospital (RBH). Under his leadership, the RBH neurosurgical unit developed a world-class reputation.

In 1965, at a general meeting of the Royal Australasian College of Surgeons (RACS), Ken moved that the college develop a Road Trauma Committee that would address the epidemic of deaths and injuries resulting from road traffic crashes in Australia and New Zealand. This committee was established and had an enormous impact in both counties that included; supporting legislation for seat belts, lower blood alcohol levels, helmets for motor and pedal cyclists and introducing many educational initiatives. He died suddenly at home on 28th January1976.

Kenneth’s work and vision has had an enormous impact on clinicians, academics, researchers and administrators. We invite you all to attend this excellent evening.