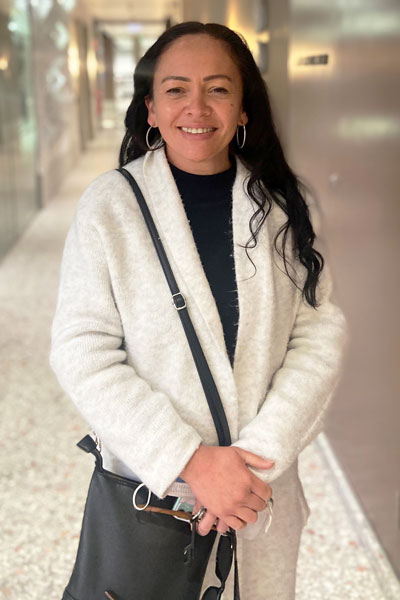 Patient Moana Staunton was the first person in the world to receive this surgery.

A world-first surgery delivered by Metro North Health in Brisbane will pave the way for women globally requiring breast reconstruction with a safer alternative to silicone implants, leaving them with nothing but their own natural tissue within two years.

The revolutionary procedure, based on decades of research, saw first clinical trial patient Moana Staunton have her silicone implants removed and replaced with a 3D printed bioresorbable scaffold, which was injected with her own fat cells.

The scaffold, made from a 3D printed medical-grade polycaprolactone-PCL which will completely dissolve and metabolise in the body, was finessed between Metro North Health and German medtech company BellaSeno for months before being printed in Germany and sent to Brisbane for Moana’s procedure.

Director of the Comprehensive Breast Cancer Institute Owen Ung and Director of the Herston Biofabrication Institute Michael Wagels, both Metro North Health surgeons, joined forces for the ground-breaking procedure which was undertaken on 23 June 2022.

Metro North Health’s Professor Owen Ung said Moana was just one of many women who had experienced breast implant illness, noting a range of unexplained symptoms she believed were linked to her implants.

“In Moana’s case, she was experiencing dizziness and generally feeling unwell, and we’ll often see patients who believe their silicone implants may be making them ill,” Professor Ung said.

“But it’s not just those experiencing complications from their implants that will benefit, as we roll out our clinical trial in patients just like Moana.  We will be moving into further studies for those who have experienced cancer, changing the lives of women who require a mastectomy and have limited reconstructive options until now.

“We are still in Phase One of clinical trials, but this work has hugely promising implications for women all over the world.”

Metro North Health’s Dr Michael Wagels said the work was made possible through years of research, first started at Queensland University of Technology.

“Our Herston Biofabrication Institute colleague and the Queensland University of Technology researcher Professor Dietmar Hutmacher has, over many years, been instrumental in developing the scientific approach /foundation to get us to this point – the first successful realization of this ground-breaking research in an actual patient,” Dr Wagels said.

“But it’s not just the extensive research that has made this possible – we’ve been aided by funding from a variety of our partners including BellaSeno, Metro North Health, RBWH Foundation, Department of Innovation, Tourism and Sport’s Advance Queensland grant, a Global Innovation Linkages grant as well as imaging support from the Herston Imaging Research Facility.

Mohit Chhaya, Co-Founder and CEO of BellaSeno, said the regenerative breast scaffold procedure was an exciting milestone in the group’s plans to ultimately design and manufacture these novel implants in Australia.

“Our goal is to further advance novel products in the field of natural tissue and bone reconstruction, working with our key partners in Australia such as Metro North Health,” Dr Chhaya said.

“This key milestone would not have been achievable without the outstanding efforts of the entire BellaSeno team and our scientific advisors over the past five years.”

“I’m proud to say the Queensland Government recognised the potential of Professor Hutmacher’s project in 2016, providing him with over $700,000 in Advance Queensland funding,” Mr Hinchliffe said.

“When we talk about the innovation economy, this what we are talking about. It’s projects like these that not only improve lives, but also have very real benefit in opening up new business and industry opportunities in the state.

“This is exactly the intent of our new Advance Queensland – Innovation for a Future Economy Roadmap, which we launched just last week.”

Metro North Health’s Phase One clinical trial will recruit 15 – 20 eligible patients and will run until they each have received two years of follow up.