A common sense approach to cannulas in the emergency department 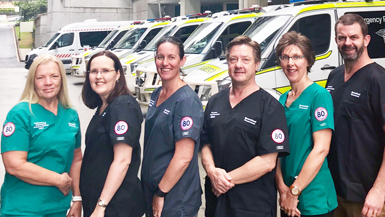 Royal Brisbane and Women’s Hospital (RBWH) has seen a 10 per cent reduction in unnecessary placement of cannulas in the Emergency & Trauma Centre (ETC) through research into a common-sense multi-modal intervention.

The research team, led by Clinical Research Nurse Tracey Hawkins and Prof Louise Cullen, and funded by the Emergency Medicine Foundation, investigated an intervention that is now being adopted in emergency departments across Australia.

“Evidence showed us that many of our patients in the ETC were getting cannulas that were not being used. This meant patients were being exposed to unnecessary pain and risk of infection,” Ms Hawkins said.

“We wanted to understand why and attempt to change this common practice. We realised that there was a culture of the ‘just in case cannula’ involved.

“When you’re in a busy clinical environment and making a lot of decisions you tend to follow a common pattern of behaviour, and we needed to find a way to empower our clinicians to stop and consider the need for the cannula—is it necessary?”

A range of tools were implemented to promote clinical decision making among the staff of the ETC.

“We came at staff with our message from all angles: education and training sessions, visual aids, real-time surveillance and feedback sessions, and change champions who prompted staff throughout their shifts.”

“Any behaviour change is hard and even more so in a clinical setting because we have a natural urge to ‘do something’ to help our patients. It has been a great reminder that part of value-based medical care is preventing unnecessary tests and procedures, and that sometimes we need to practice deliberate clinical inertia—the art of doing nothing as a positive response.”

The project—CREDIT: Cannulation Rates in the Emergency Department Intervention Trial—found an overall reduction in the number of cannulas placed after the multi modal intervention. It also found the rate of unused cannula decreased.

An economic analysis found that the average cost per cannula insertion at RBWH was $22.80, which if the intervention was rolled out across Australia could potentially save $13.7 million dollars annually.

Ms Hawkins has been approached by hospitals in both Perth and Melbourne about how they can apply a similar approach in their EDs. Here in Queensland, both QEII and Ipswich hospitals have commenced implementation.