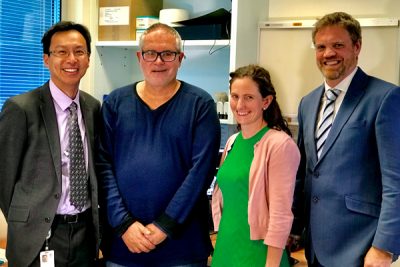 RBWH patient Chris Harrison (second from left) was suffering from the debilitating effects of Parkinson’s Disease, until he received life changing Deep Brain Stimulation treatment. Chris is now getting back to the things he loves like fishing and hiking with his family thanks to the treatment he received from the amazing #RBWH Neurology team.

Deep brain stimulation treatment for Parkinson’s Disease patients at Royal Brisbane and Women’s Hospital (RBWH) is giving a new lease on life to people who had lost all hope.

This is the first time the treatment has been offered in a Queensland public hospital to patients based throughout the state, with a new trial making it accessible to patients who had previously deemed it out of reach.

Deep brain stimulation is essentially a pacemaker for the brain and RBWH has successfully used this procedure on five patients since October as part of a trial.

One of these patients is 49-year-old Chris Harrison, who was diagnosed with Parkinson’s Disease in 2013. Following his diagnosis, Chris deteriorated from being an active family man with a successful career in accounting, to being unable to leave the house most days and struggling to perform basic tasks such as cooking a meal and dressing himself.

“I was starting to lose hope that I would ever live a normal life again. The medication prescribed to me was no longer working, and often gave me adverse side effects,” Chris said.

“One of the medications I was taking caused the muscles in my feet to seize, which meant I could only walk backwards.

“I didn’t want anyone to see me the way I was and rarely left the house. It took its toll on our entire family, mentally, physically and financially.”

Having read a lot about the success of deep brain stimulation treatment, Chris jumped at the chance when asked if he was interested. He says the impact of the surgery was immediate and has given him his life back in a way he never thought was possible.

“I am now able to do every day things like throw a ball around with my two sons. My family and I are going on our first holiday in five years this month,” he said.

“I feel like we have our lives back. We’re no longer suffering. That’s the best part.”

Minister for Health and Minister for Ambulance Services Steven Miles said new technologies such as deep brain stimulation for Parkinson’s Disease are paving the way for future healthcare.

“Chris is just one of the many patients both here at Royal Brisbane and Women’s Hospital and throughout the state who are benefitting for new and cutting-edge medical treatment,” Mr  Miles said.

“We are committed to providing all Queenslanders with access to new technologies, so they can get back to living their lives to the full.”

RBWH Neurologist Dr Robert Adam said the Neurology team are thrilled to be able to offer the treatment to people like Chris through the Queensland public health system.

“Deep brain stimulation is essentially a pacemaker for the brain. It rewires the electrical signals that send messages to different parts of the body and helps make movements smooth,” Dr Adam said.

“The effects of Parkinson’s Disease can be extremely debilitating, so being able to offer a new treatment to patients who have tried everything else is incredible. It’s why we do what we do as medical professionals.

“The results we have seen so far have been phenomenal.”

RBWH will evaluate the trial involving 10 patients with the aim to introduce the service.