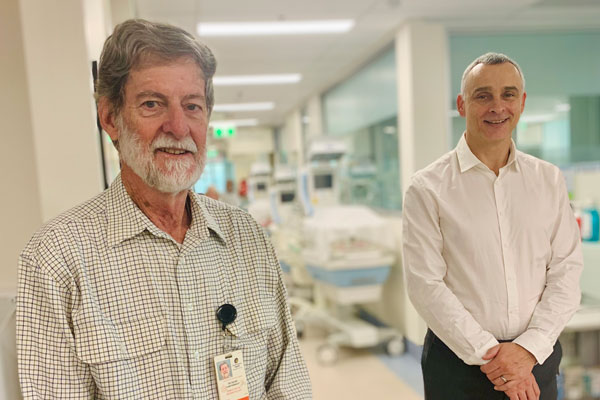 On the 10th of August 2000, 46 tiny babies were wheeled in their cots from the Royal Women’s Hospital to the brand-new accommodation for the Grantley Stable Neonatal Unit (GSNU) at Royal Brisbane and Women’s Hospital’s (RBWH) Ned Hanlon Building.

On the 10th of August 2000, 46 tiny babies were wheeled in their cots from the Royal Women’s Hospital to the brand-new accommodation for the Grantley Stable Neonatal Unit (GSNU) at Royal Brisbane and Women’s Hospital’s (RBWH) Ned Hanlon Building. Twenty years on, the GSNU continues to provide world-class care to premature and sick babies from across Queensland and Northern New South Wales.

Each year more than 1,600 newborns are cared for in the unit, many of which stay for months at a time while they receive life-giving medical treatment.

RBWH Neonatologist Dr David Cartwright has worked as a neonatologist at the hospital since 1982 and says the GSNU has come a long way since it first opened.

“Thanks to technology advances, research findings and increased education for staff, we’ve significantly improved the care we provide over the past twenty years,” he said.

“As with any medical field, we’ve always done our best using the tools we have, however we’ve learnt so much since the year 2000 which has resulted in an overall increase in the number of babies that survive.”

“Our nurses, in particular, have increased their skills dramatically since the GSNU opened thanks to the implementation of the neonatology nursing education ‘transition’ program. In earlier times, the medical staff were the sole decision makers – now, the nurses have an extensive skill set which we cannot operate without.”

RBWH Neonatology Director Pieter Koorts says one of the most rewarding parts of working in GSNU is the lifelong bond the staff develop with their patients.

“Many of our patients and their families are here for months at one of the most vulnerable times in their lives. They put their complete trust in us to care for their newborn baby and in turn, we’re able to build a real relationship with them,” he said.

“This relationship doesn’t end when they leave the hospital. We often receive letters from the children we cared for in the unit who have grown up and heard stories about what happened when they were born from their parents.

“We’ve had 23-year-olds coming into the ward to say thank you for keeping them alive. It’s incredibly special.”

Dr Koorts says that celebrating the 20th anniversary of GSNU has been amazing, but what they’re really looking forward to is seeing what the next twenty years will bring.

“It’s an honour to work in a Unit that has such a great legacy,” he said.

“For the team in GSNU, they don’t really consider their role as a job. For them, it’s a calling.”