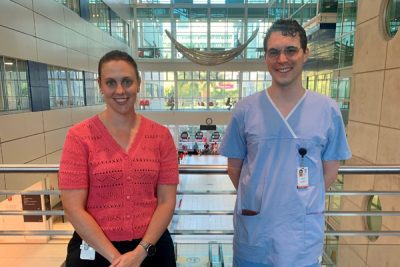 The awards recognise junior doctors across Australia and New Zealand who have made valuable contributions to prevocational medical education and training.

Dr Samuel Smith said being named as the Queensland Lead Nomination in the awards was a very kind and unexpected honour to receive, but attributes it to his willingness to create positive change.

“In my clinical workplaces, I work hard to identify and resolve issues that make the workplace inefficient or unenjoyable, or a risk to patients and staff,” he said.

“In a big organisation like RBWH, it’s easy to let things slide because change is hard and sometimes not in the culture of junior doctors, who can feel sometimes a bit powerless, or are too focussed on moving onto the next stage of training.

“Taking some time to report things, advocate on committees and just see through the changes you want is immensely satisfying and I am proud to have helped make some big, as well as some very small, changes at RBWH in my two years here.

“I hope to encourage others to do the same in their clinical areas.”

Congratulations to our talented medical staff named in the awards.