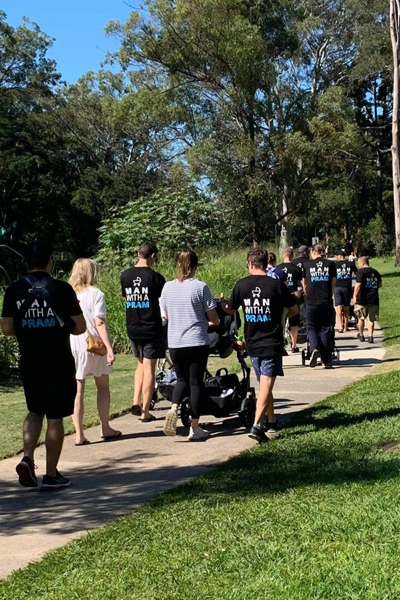 A Metro North Program, now in its second year, is helping provide new dads with the tools to be the best father they can be, as well as providing opportunities to connect with other dads.

The Dads N Peers Program was developed to bridge the gap between traditional women-centred maternity care and a more holistic approach that acknowledges the vital role fathers play in supporting families.

Dads Group is based in Queensland and has designed their ‘integrated model of care for fathers in the perinatal period’ over the past eight years. They now co-deliver programs nationally with health and community organisations to improve the outcomes of new fathers, mothers and infants.

As part of this project, five local community-based dads groups were established in Nundah, Ashgrove, North Lakes, Redcliffe and Caboolture. There are over 1000 members of the groups, which schedule regular catch-ups where dads bring their baby/toddler and connect with likeminded fathers. There is also a Facebook group community which allows dads to stay connected and support each other at any time of the day or night.

Dads Group CEO Thomas Docking said the collaboration with Metro North Health is an extremely important partnership for the organisation.

“Dads Group was started in response to data from the Australian Fatherhood Research Consortium and participating organisations that indicated that there are unintended negative outcomes happening to new mothers and infants as a result of not supporting the father/non-birthing partner,” Mr Docking said.

“For the past eight years, we have been continually developing and evolving our globally unique program to empower new fathers to be the best support and carer they can be throughout the tumultuous perinatal period.

“Partnering with Metro North Health has been a key step in this journey and has allowed us to implement our ‘Dads Group Integrated Model of Care’ to further assist new fathers.”

Across Metro North, more than 1100 fathers and birthing partners have attended father-inclusive antenatal birth and parenting education sessions with a key focus on the emotional preparation required for the transition to parenthood.

Not only does this program improve awareness and understanding of perinatal and infant mental health, it also provides a simple emotional wellbeing toolkit for both mums and dads to better support themselves and each other.

In addition, more than 290 dads signed up to a new service called SMS4dads that sends three texts per week to father’s phones with tips and information about infant development from 16 weeks of pregnancy until the baby is 12 months of age.

“One of the key risk factors of post-natal depression is an unsupportive partner, so providing dads with the education and support to be there for their partner and baby has the potential to create a lasting positive impact,” Ms. Funk said.

“The response from fathers involved in the project has been overwhelmingly positive, with one father recently stating that ‘Before, I was keeping a lot of things bottled up because I had nobody to talk to, but now I have other dads to share with who can understand. It helped me not feel alone.’”

“It is vital that we continue to educate midwives and other health professionals on the importance of better supporting fathers/partners throughout the perinatal period and to raise their awareness of supports available.”