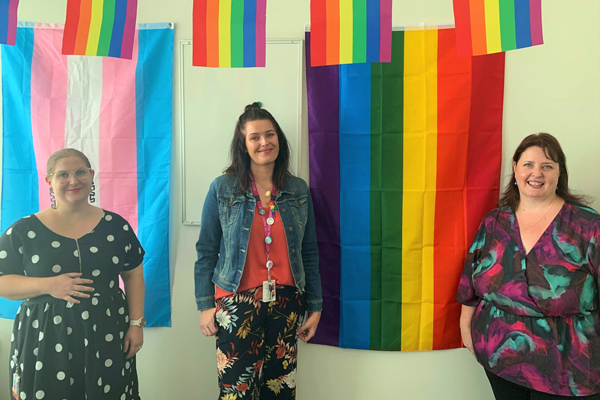 The Metro North Gender Service based at Royal Brisbane and Women’s Hospital (RBWH) has won the 2020 Trans Community Virtual Awards as Service Provider of the Year.

The award win recognises the service for its work in creating and supporting safe spaces for the Transgender, Gender Diverse and Non-Binary communities.

The Metro North Gender Service is the only adult public service of its kind in Queensland and sees patients from all over the state, both in person and via telehealth. It consists of a small but mighty multidisciplinary team of clinicians who are passionate about delivering a holistic service to adult patients with Gender Dysphoria and those who don’t identify with their birth gender.

The services provided by the Gender Service aren’t as straightforward as general medical care. The team requires a deep understanding of exactly what the patient is hoping to achieve, whether it be changing their voice to suit their identity, receiving psychological support or consulting for surgical intervention.

The Metro North Gender Service not only sees patients from all over Queensland but has recently extended their care to an Indigenous trans female from remote Northern Territory to commence her hormone therapy. Their services are also available to prisoners.

Since launching in 2017, the RBWH Gender Service has successfully supported over 600 adults over the age of 17-years through hormone replacement therapy, voice coaching, therapy, family adjustment support and mental health services. The service is kept busy with episodes of care increasing by 48 per cent since July 2019.

“The win is testament to our entire team’s passion for improving the lives of transgender, non-binary and gender-diverse people,” she said.

“Each patient has a different story, so it is important for us to involve our patients through every step of the journey.

“By engaging with people we’re able to continually improve the service, making it more accessible and able to meet individual needs.

“We also have a team of consumers behind the service who provide gender health education to all Queensland Health staff.”