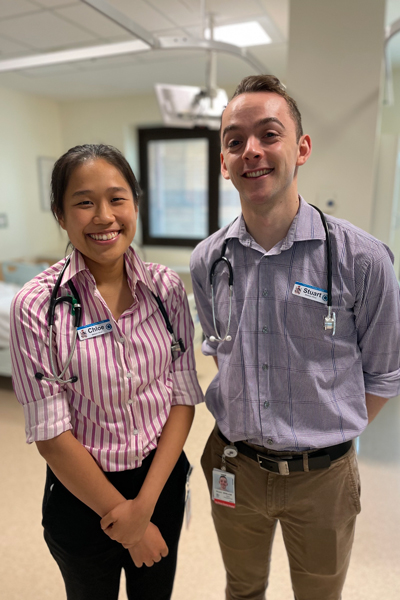 Chloe and Stuart are two of our new medical interns starting at Metro North Health this week.

The substantial cohort makes up a record number of new doctors set for Queensland with 834 new interns starting across the State.

Brisbane locals Chloe Yap and Stuart Winlaw, both 26 years of age, have this week started their first rotation in general medicine at The Prince Charles Hospital.

For Stuart, getting his first choice and staying close to home and his family has been key.

“I grew up here and it’s nice that I’m so close to home while at a good-sized hospital with a focus on respiratory, cardiac and also a big mental health unit,” he said.

Some of The Prince Charles’ features that attracted Stuart were also a big drawcard for Chloe, who is particularly interested in the interface between physical and mental health.

“I’m interested in delirium and psychiatry as these are need areas and there is a lot that can be done in this space,” she said.

“I completed my PHD while finishing my medicine degree and I focussed on biological psychiatry and autism, so I’m excited by both clinical work and research and they do a lot of that here.”

Minister for Health and Ambulance Services Yvette D’Ath said the investment in medical interns across Queensland was the largest yet.

“I am pleased to announce that this year’s intake is the largest we have seen in Queensland,” Minister D’Ath said.

“The expertise and energy of these medical interns will benefit many communities across the state, enhancing accessibility to local services and delivering a much-needed respite to local healthcare workers.

“Queensland has not been immune to the workforce pressures being experienced by healthcare systems across the world, but with only 13 spots left to fill, I am confident this year’s intake of junior doctors will provide a significant boost to the medical workforce in rural, regional, and metropolitan hospitals.”