A new chapter begins for Tania 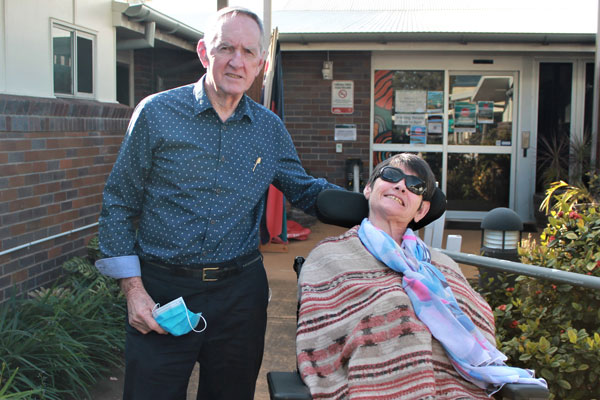 We first caught up with Tania and Bob at the old Jacana Acquired Brain Injury Centre in 2017, when they were so happy to share their story and how we can make improvements to care we provide.

An exciting new life chapter has begun for one of our much-loved residents from the Brighton Brain Injury Service, Tania Pearce.

Tania, who was a resident at the Brighton Brain Injury Service (BBIS, formerly Jacana Acquired Brain Injury Centre) for more than 20 years, has now happily settled in her very own accommodation at Asher House, Wynnum West.

“She has definitely livened up the place as she is involved in everything,” Tania’s father Bob Pearce said. “She has joined the singing group, which she loves.”

“Everything is now at her fingertips so to speak, with all of the facilities there and the care is great. You couldn’t ask for a nicer bunch at the Wesley Mission.

“And Tania’s home is ten minutes down the road from my home which makes it a lot easier. I can come and go as I like.”

As part of the support provided through the National Disability Insurance Scheme (NDIS) Tania receives specialist accommodation at Asher House, plus 24-hour care, physiotherapy and occupational therapy, as well as ongoing coordination support for all of her personal needs.

Bob said moving to Asher House gave Tania certainty and him peace of mind as this would be her forever home.

“Tania now has a bigger room, her own personal ensuite and patio, and a larger wardrobe. And, it is great that she now is also able to live with four of her former friends from BBIS,” he said.

When we spoke to Tania, she was very happy about the move and loved her new accommodation, and that she was near some of her old friends.

Tania continues to listen to her favourite station 4KQ and her 80s classics, and now Bob can take her along the Wynumm West foreshore to enjoy the outdoors and some seafood.

Bob was grateful for the care provided through the BBIS over the past two decades, and as we always appreciate he had one last important piece of advice to all carers of people with a disability.

“You should always talk to your patients, as the more you do the better you understand how to care for them,” he said.

BBIS is a subacute service which provides intensive inpatient rehabilitation and community transition services for adults under the age of 65 years with moderate to severe impairments resulting from an acquired brain injury.

BBIS has supported 30 patients with an acquired brain injury transition into ongoing specialist care and coordination in the community over the past year through the NDIS.