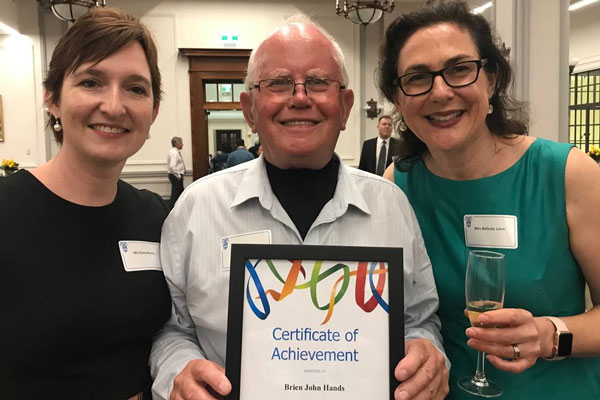 When people think of the professions involved in cancer treatment, they might think of oncologists, oncology nurses, radiographers and pathologists. However, there are a wide range of professions involved in the treatment and rehabilitation of cancer patients. In the case of Royal Brisbane and Women’s Hospital patient Brien Hands, an integral part of his recovery was the speech pathology team.

73-year-old Brien was diagnosed with vocal cord cancer in 2005, which was treated with a laryngectomy. A laryngectomy is the surgical removal of the voice box which meant Brien had to learn to speak again in an entirely new way, as well as adjust to a new way of breathing and adapt to changes with eating and drinking.

“The speech pathologist taught me how to use a voice prosthesis, as well as a range of other techniques to help me communicate” Brien said.

“I was devastated when I first found out I needed a laryngectomy, however the staff involved in my care including the speech pathologists helped me to recover and live a normal life again.

“They even taught me how to change my own voice prosthesis, which is something many patients need to come into hospital regularly to do. Being able to do it myself has meant my wife and I could continue travelling overseas – one of our favourite pastimes.

“Over the past 14 years the speech pathology team has taught me a lot about voice related issues, but I think I’ve probably taught them a thing or two about life!”

Brien has put his positive attitude towards life to great use by volunteering his time as Brisbane’s only Laryngectomy Support Visitor. Brien visits patients and their families to provide reassurance, accurate information and support to them while they adjust to the changes after laryngectomy surgery. In recognition of his community service he was awarded a 2020 Brisbane Lord Mayor’s Australia Day Award for his commitment to helping others.

RBWH Speech Pathologist Belinda Lehn said that Brien has come a long way since he first lost his voice box 15 years ago.

“Despite some complications, we’ve worked closely with Brien to teach him new ways of speaking, breathing, smelling and swallowing so he can live these aspects of his life independently,” she said.

“The relationship speech pathologists form with laryngectomy patients is life-long, which means we’ve has the pleasure of getting to know Brien and his wife.

“We are fortunate to have Brien work with us to help new patients adjust to the significant changes this surgery brings. His positive attitude is a true inspiration to others”.

Brien, alongside everyone at RBWH, thanks our speech pathologists for the vital role they play in healthcare!