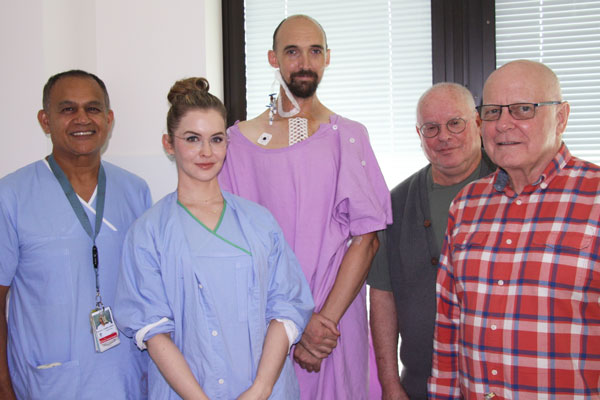 The PEARS implant is based upon a 3D model of the patient’s aorta. The fabric graft created from this model is placed around a patient’s aorta to prevent dilatation and dissection.

Cardiac surgeon Dr Livia Williams said that without PEARS as an option patients may normally have to undergo a full valve root replacement which is a complex surgery that involves stopping the heart, excising the valve and root, and often replacing the valve with a metallic implant.

“Root replacement is a life-saving procedure; however, it comes with a complication rate and may involve patients taking anticoagulant therapy for the rest of their lives,” Dr Williams said.

“Due to the risks involved it was traditionally considered important to only perform aortic surgery once the aorta reached a critical dimension. That meant delaying operative treatment for as long as possible.

“However, patients often spend their lives ‘living in limbo’, frequently undergoing tests to monitor their aorta and always worrying about the risk of rupture. With a PEARS procedure intervention can be performed with lower risk and at a smaller dimension.”
Since establishing Australia’s first formal PEARS program in March 2019, TPCH has attracted nation-wide attention with many interstate referrals for surgery and international interest.

The program, led by Dr Peter Tesar, has been well received by the patient community.

“We are finding that many patients are very enthusiastic about this procedure as it does not require the heart lung machine and their aortic valve can be left alone,” Dr Williams said.

The procedure was designed by a UK engineer who suffered Marfan Syndrome, Tal Golesworthy, who worked with UK cardiothoracic surgeon Dr John Pepper to design and refine the implant, before becoming the world’s first recipient. Almost 500 patients have undergone the surgery worldwide.

TPCH has now performed approximately 60 procedures and is now one of the world’s largest PEARS centres.