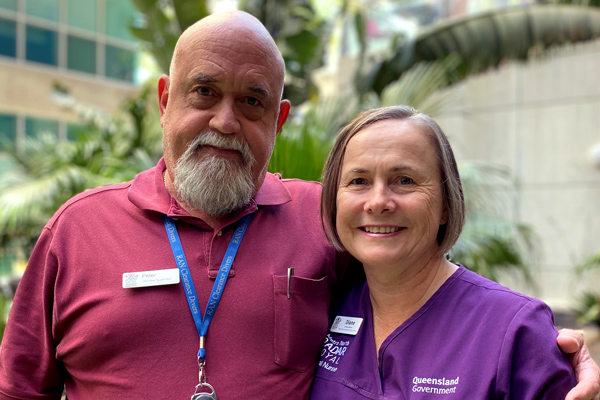 When they met at the Hero of Waterloo Hotel, tucked away in Sydney in the late-seventies, Pete and Diane couldn’t have been more different.

But as the parents of two adult kids prepare to farewell their colleagues at Royal Brisbane and Women’s Hospital after working together for more than 25 years, it was clearly a match made in heaven.

“We never thought we’d end up working in a hospital together,” said Pete, who is retiring as RBWH’s Hyperbaric Health Practitioner and Chamber Supervisor.

“It’s such a large place and our paths do cross, but not all the time. We would find days to have lunch together and we work with a lot of the same people which has been really quite useful.”

The ex-Navy clearance diver said helping patients through their healthcare journeys has brought him a great deal of joy through the years, particularly when it comes to the positive effects on children who’ve come through the department.

“There are things we’ve both done and seen in our jobs that have left a lasting impression. Not a lot of people get to experience what we have,” he said.

Alongside Di, who is handing over the reins as Clinical Nurse for Residential Aged Care District Assessment and Referral (RADAR) at RBWH, they’ve amassed an impressive half a century of service to Queensland patients.

During their time in Townsville before making Brisbane home, Pete worked in project management to set up a new facility, a rewarding undertaking that benefited the local community. Di worked in Emergency and on retrieval teams to rescue patients from flood waters and other emergencies.

Just last year, Diane received the Eric Murray Quiet Achiever Award from the Australian College of Nursing – an accolade she said invigorated her passion for nursing.

“To be acknowledged like that was really lovely,” Di said.

Despite a busy Christmas to look forward to and a road trip to Tasmania to plan, Pete and Di are leaving RBWH with heavy hearts.