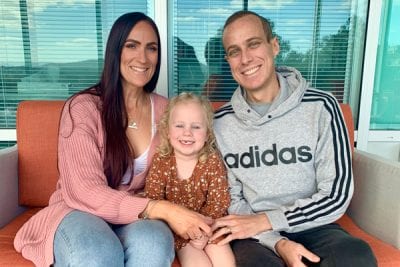 The school pick-up run on Friday 31 July 2020 was one to remember for Royal Brisbane and Women’s Hospital (RBWH) patient Adam Freeman. After seven months in hospital, the 37-year-old father of four was finally able to greet his three sons at the school gate alongside wife Amy and daughter Makayla.

Adam’s journey started when he was diagnosed with a rare white blood cell disease called “chronic granulomatous disease” – a disease that causes the immune system to fail and means that he is at risk of opportunistic infections. The disease also caused his kidneys to fail, leading to a kidney transplant, and then long-term dialysis.

In late 2019, Adam was enjoying a holiday on the Gold Coast with his family when he developed a severe headache and started vomiting. A scan showed a lesion in his brain, and he underwent emergency brain surgery on New Year’s Eve at the Gold Coast University Hospital. A serious fungal mould infection called “Aspergillus” was diagnosed.  The infection had spread to his lungs, skin, brain and heart. He was transferred to the Royal Brisbane and Women’s Hospital where he spent the next seven months undergoing numerous surgeries, including brain and heart surgery, to remove the infection.

The Infectious Diseases team, in conjunction with the medical researchers at the University of Queensland Centre for Clinical Research (UQCCR) worked to bring a clinical trial of a new drug to RBWH, which helped treat his fungal brain infection. Adam is approximately the 80th person in the world to receive this drug, and as it is an oral drug he is now able to return home while continuing treatment, rather than staying in hospital on a drip. Adam is one of the few people in the world with his condition to survive this kind of infection.

For Adam, his says his positive mindset alongside the world class healthcare provided by the teams involved helped get him through.

“My prognosis wasn’t looking good when I arrived in hospital, and like anyone who receives bad news about their health, I experienced a range of emotions,” he said.

“I made conscious choice to stay determined and positive throughout my treatment – both for myself and for my family.

“The medical teams at RBWH have worked extremely hard to get me to where I am today. I wouldn’t have made it through without them.

“Being in hospital during COVID-19 meant most of my visits from my family were virtual, so it’s extra special to be going home to hug them in person.”

“I’m so thankful to everyone involved.”

RBWH Infectious Diseases specialist Dr Krispin Hajkowicz said that Adam’s case was incredibly complex, but was delighted that the whole RBWH team was able to work together to bring him a ground-breaking new treatment.

“Seeing Adam walk off the ward with his wife and daughter, in time to pick his boys up from school made me very proud to work at this hospital,” he said.

“I just might have had tears in my eyes – I think we all did!”