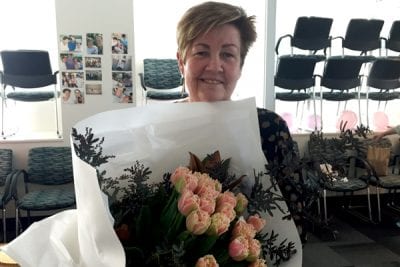 After 29 years and over 1000 births, much-loved midwife Karen Marshall has retired from Royal Brisbane and Women’s Hospital (RBWH).  Known for her tireless advocacy for women’s birthing choices, Karen leaves behind an indelible legacy as one of the original midwives who established RBWH’s Birth Centre and Queensland’s first continuity of care model.

Karen retires on the 25th anniversary of RBWH’s Birth Centre which has become an important and popular option for Queensland women preferring maternity care managed by midwives. It was her invaluable role in setting up the Birth Centre which Karen considers to be her greatest career achievement.

“From the beginning of my career and all the way through, it’s always been about providing choice for women and empowering them to explore all the options available during pregnancy, labour, birth and post-birth so they can choose the care that’s best for them,” said Karen.

“The Birth Centre and introducing continuity of care is certainly my lifelong legacy. I can retire now feeling like I’ve contributed to a place that has given me so much.”

Tributes to Karen during a special farewell afternoon tea echoed her sense of fairness, integrity and passion for facilitating informed consent. She was also recognised for her contributions to evidence-based maternity care, her dedication in supporting and teaching other midwives and student midwives and, unanimously, her second-to-none baking skills.

Despite looking forward to sleep ins and no more night shifts, Karen said it’s with mixed emotions that she says goodbye to RBWH and her colleagues.

“RBWH has been such a big part of my life and I will truly miss coming to work and seeing my colleagues every day. Supporting women and their families has never felt like a job to me.

In retirement, Karen has plans to spend more time with friends and family and travel Central and South America when international borders reopen.