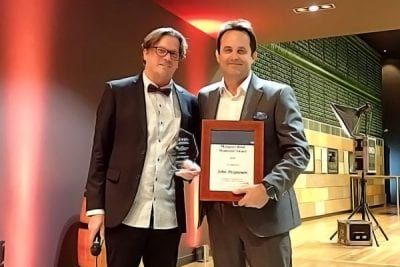 Spending several months in Sierra Leone, West Africa, during 2015’s Ebola outbreak wouldn’t have been everyone’s cup of tea, but for Metro North Public Health Unit Director John Piispanen, it was a tremendous opportunity to truly make a difference in the lives of others.

“The response was tasked with battling one of the deadliest diseases known to man in one of the most challenging places on earth,” Mr Piispanen said.

“Helping communities is not only a local issue, but a broader international one. It is very rewarding and satisfying going back to your core skill set, working to control diseases, and investigating ways to help and ultimately protect human health,” he said.

Working as an Environmental Health Officer and the Director of the Metro North Public Health Unit, Mr Piispanen has since received three incredible awards this year thanks to his ongoing commitment to public health and the dedication he shows to his profession every day.

In early September Mr Piispanen, along with fellow Metro North colleagues Harold Figueroa and Ben Minnis, attended a ceremony at Government House in Canberra where they were each awarded a Humanitarian Overseas Service Medal.

This medal is awarded to Australians who perform emergency humanitarian work in perilous overseas settings. For Mr Piispanen, helping vulnerable communities aboard, and in particular his experiences in Sierra Leone, are tremendous opportunities to use his skills and truly make a difference.

To top things off, at the recent EHA national conference he also received the National Margaret Hind Memorial Award 2019 for his outstanding and ongoing commitment to the environmental health profession.

He received these two prestigious EHA awards for his strong work ethic, integrity, transparency, honesty and high achievement for the promotion and enhancement of the environmental health industry.

Mr Piispanen is also a member of the Australian Medical Assistance Team (AUSMAT) and has deployed internationally to support those vulnerable communities whose health has been severely affected by disasters and at times communicable diseases.

He has been deployed on numerous overseas contracts, including to Timor-Leste, Philippines and the Solomon Islands, and is sent there to help communities who are in desperate need of health services.

With over 34 years’ of consistently demonstrating his ability to perform high-quality care, compassion and empathy in both the Metro North community and abroad, Mr Piispanen is a worthy recipient of all three of these awards and is a truly valuable asset to the Metro North team.