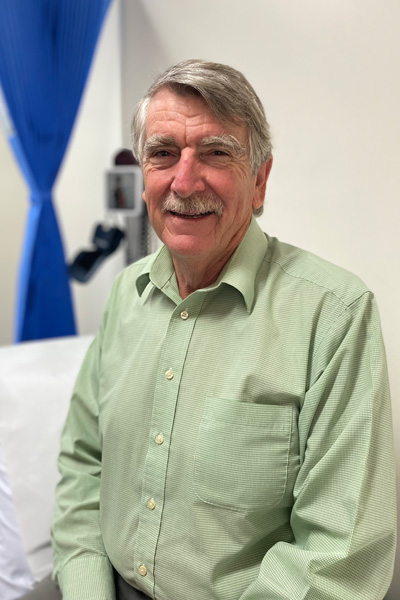 John Archbold was Australia’s first patient into undergo the new procedure at TPCH.

An Australian first procedure delivered by The Prince Charles Hospital (TPCH) in Brisbane may revolutionise treatment for the thousands of Australians living with an abnormal heart rhythm.

The procedure, known as Pulse Field Ablation (PFA) involves delivering a precise electrical field via a catheter inserted through the groin into the heart, to rapidly firing lung vein tissue which causes irregular heart rhythm, a condition known as atrial fibrillation.

Atrial fibrillation (AF) can significantly affect a person’s quality of life with often disabling symptoms such as palpitations, chest pain and shortness of breath. If not diagnosed and left untreated, the condition can cause stroke and heart failure.

The new procedure, which has been trialled in Europe and USA with positive results, is an improvement on current ablation techniques which apply radiofrequency (burning) or cryoablation (freezing) energy to eliminate the rapidly firing lung vein tissue causing AF.

TPCH Cardiologist, Assoc Prof Haris Haqqani said that while both burning and freezing techniques are effective in treating atrial fibrillation, there is a small risk of complications including thermal damage to adjacent structures such as the food pipes or nerves.

“This new procedure is also significantly faster than existing techniques as only a few seconds of actual energy delivery time are required to each area of affected lung vein tissue.”

In Australia, there are approximately 8,000 people who undergo AF ablation each year, many of whom would suffer severe, life-affecting consequences without treatment.

“The availability of PFA has the potential to revolutionise the treatment of AF and other heart rhythm disturbances,” Assoc Prof Haqqani said.

“The elimination of collateral damage complications has been a ‘holy grail’ of catheter ablation procedures.”

John was diagnosed with atrial fibrillation in 2020 when he became increasingly short of breath. When examined by doctors, he was found to be in severe heart failure with a very enlarged and weakened heart.

John said having AF was like having a car that wouldn’t start.

“I was short of breath and felt like my heart was racing inside my chest,” John said.

A retired electronics engineer involved in the design of electronics equipment for over 40 years, John was excited to be the first patient to undergo the new PFA procedure.

“I know the rigour that goes into developing new medical electronic equipment, so it was no brainer for me to have the procedure – I felt very safe and comfortable,” he said.

Having an AF ablation has allowed John heart rhythm to be controlled without the use of these strong medications which are of limited effectiveness and carry significant risk of serious side effects.

John, who was up and walking around within 24 hours of having his procedure said he feels like a new man.

“I feel fantastic and am ready to get on with life,” he said.

The new procedure has the potential to benefit around 200 patients at TPCH every year.

Ongoing trials are assessing the effectiveness of the new procedure compared to existing ablation methods but in the meantime, the demonstrated improved safety and efficiency of PFA have been very welcome.