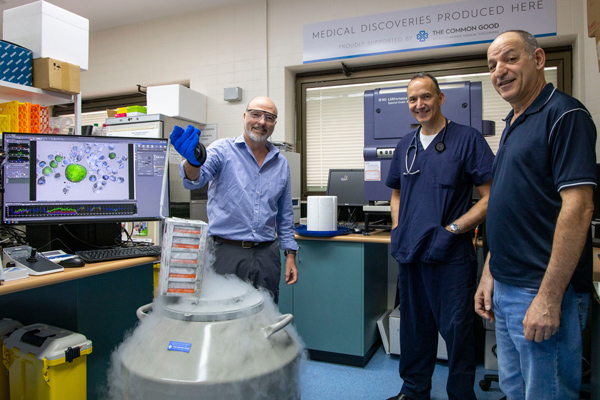 World-first treatment for silicosis underway at The Prince Charles Hospital

Clinicians and Researchers from The Prince Charles Hospital (TPCH) and the University of Queensland (UQ) have developed whole lung lavage, a ground-breaking new treatment that provides hope to those suffering with artificial stone silicosis.

Following a comprehensive screening process of nearly 1053 Queensland tradespeople by WorkCover, an astounding 179, or 17%, were diagnosed with silicosis. A further 32 had a diagnosis of progressive massive fibrosis – a far more advanced form of the disease.

Silicosis is now being viewed as the ‘new Asbestosis’ affecting a new generation of people who have been exposed to high-silica products including the popular engineered stone products used in benchtops.

TPCH’s Head of Lung Transplant and Lung Fibrosis Research Professor Dan Chambers said that there is now hope for those hundreds of workers in Queensland who have contracted silicosis, as until now there has been no treatment for the disease.

“We’ve seen silicosis mostly in young people, some as young as 25 years old, so it’s critical to help them and help them fast. This has been a race against the clock, since once scarring occurs it may be too late to remove the silica,” Professor Chambers said.

“Early detection and treatment is key, so that the disease does not progress into the more advanced form – progressive massive fibrosis. We encourage any tradespeople to get screened so that treatment can begin as early as possible.”

Former stonemason and whole lung lavage recipient Anthony Constantine said that the treatment had been life-changing for him.

“Just knowing that horrible stuff is not inside me anymore is just such a relief, I’m not stressed about it anymore. My mental load has been lifted,” he said.

“Being given a death sentence was a shock, I basically shut down. Having this procedure has truly changed my life, I can’t thank everyone enough.”

To determine if whole lung lavage would be effective against silicosis, TPCH researchers led by Dr Simon Apte and Prof Chambers developed completely new diagnostic techniques that allowed clinicians to directly measure silica levels in patient’s lungs. This step was critical to the success they have seen with whole lung lavage.

“Normally bacteria in the lungs are fought off by the immune system, but silica crystals don’t break down like bacteria. This causes the immune system to go into overdrive, leading to lung inflammation and scarring. This simply means that the lungs cease to function properly, and people cannot breathe,” he said.

Professor Chambers worked alongside TPCH Lung Researcher Dr Simon Apte to develop a technique that allows them to ‘open up’ a patient’s affected lungs and extract the crystal, allowing them to calculate their ‘crystal load’.

Armed with this information, a team of clinicians led by Professor Chambers have been able to use the whole lung lavage treatment to wash out damaging silica crystals and damaged cells, effectively ‘rinsing out’ the lungs in what can be a four to five-hour procedure. The Brisbane protocol has now been rolled out to clinicians in Sydney and Melbourne, who will soon commence whole lung lavage for workers in NSW and Victoria.

The Common Good CEO Michael Hornby said that funding this type of research is extremely important and is hopeful this whole lung lavage procedure will help many young workers not just in Queensland, but across Australia.

“This treatment, if successful, could mean a cure for these young people – we are hopeful this innovation will save many lives and give them back their health and future,” he said.

“This problem is very widespread, and potentially worse than we currently know. It is fantastic that we now have this treatment to offer hope to sufferers of silicosis. However the best thing is prevention. Appropriate personal protective equipment is extremely important for anyone working with high silica products, in order to prevent exposure in the first place.”