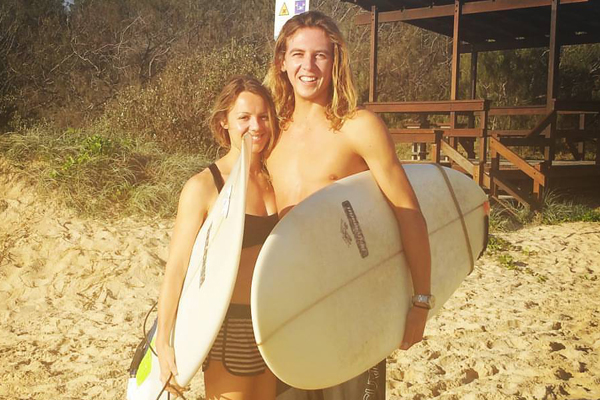 Nathan Pain and his wife Eleisha before his transplant.

When Nathan Pain blacked out on his surfboard while waiting to catch a wave, he would never have thought he was about to need a new heart.

Remembering little about what happened, Nathan later learned that friends had dragged his lifeless body from the surf to the beach where strangers had undertaken two rounds of CPR before he was taken to the Sunshine Coast University Hospital and subsequently airlifted to The Prince Charles Hospital for specialist cardiac care. To his shock, Nathan also found out that he was in a deadly heart rhythm for over four minutes and 10 seconds before his defibrillator was able to restore his heart back to a normal rhythm.

“I couldn’t believe I had a cardiac arrest. One minute I was in the water on my surfboard, the next, I was on the beach waking up. I was so foggy in the head, I couldn’t remember anything,” Nathan said.

“Nathan’s heart function was extremely poor and was affecting other organs such as kidneys to work properly without support,” Dr Chan said. “We were in dangerous territory so had to act quickly to maintain him in good physical condition on the heart transplant wait list until a suitable organ became available.”

After three days, doctors made the decision to place Nathan on a heart assist device to keep him alive until a new heart became available.

Nathan spent 13 months on the device, waiting to receive the gift from a total stranger that would give him back his life.

“Being on the device was a big adjustment,” he said.

“Physically I was pretty limited – I couldn’t go in the water which was a big deal for me, particular as a surfer. Mentally it was hard to get my head around everything. I knew that I would need a transplant way down the track, but never thought it would happen so soon.”

For Nathan, receiving his lifesaving phone call was a big shock and a relief.

“I had been on edge waiting for my transplant because it had been such a long time. It was something that I looked forward to, but also something that I dreaded. It was really hard,” Nathan said.
“I had to stop and think that for me to live, it meant someone else had suffered a loss and had to make the final decision to donate their loved one’s organs. For this I’m so grateful and will be for the rest of my life.”

Nathan, who is happy to be back surfing again and starts university this month, wanted to thank the staff at The Prince Charles Hospital for the great care he received, as well his wife and friends who supported him through the tough times.

He also encourages everyone to let their family know your organ donation decision.

“Have the donation conversation. It’s hard, but it changes people’s lives,” he said.

“Thanks to organ donation and my transplant, I have a future and it’s great.”