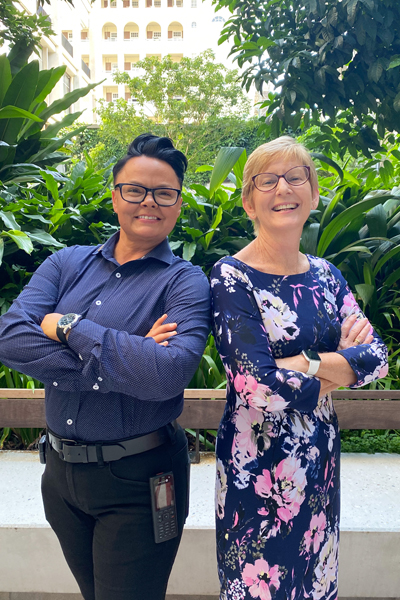 #ChoosetoChallenge: the theme of 2021’s International Women’s Day campaign and a phrase many women just like STARS Security Coordinator Wendy Roestenburg have adopted as their mantra in the workplace.

Wendy knows first-hand what it is like to challenge gender stereotypes. As a woman in security, and heading up the protective services team at STARS, Wendy is undoubtedly showing us what we already know in this current day and age, that women really can do anything they’d like to.

While Wendy’s team comprising entirely of men are incredibly welcoming and supportive of her, she admits her career hasn’t always been like this.

“I’ve worked in security since I was 18-years-old, to be honest working in this industry is all I’ve ever known,” she said.

“I’ve certainly encountered bias in the workplace over time from colleagues and clients, but I haven’t let it dictate my level of service or commitment to the job.

“There aren’t any women in my team so I’d love to be a strong example who others could look up to, which to me, is what International Women’s Day is all about.

“It’s a day to celebrate strong capable women no matter what they do, where they are or where they come from, and recognise the strength of women worldwide.”

Women like Wendy are represented all across Metro North, with a 74 per cent female workforce. In particular, women are most represented in fields such as nursing, managerial roles and technical non-clinical roles.

Even in the operational workforce where Wendy’s role sits, women outweigh men, with females comprising 52% of Metro North’s operational cohort.

Community and Oral Health Nursing Director Mary Wheeldon admits things have changed a lot since she first started her nursing career, with many more women in senior roles without having to choose between work and family.

“Today is about recognising women have opportunities to achieve whatever they want by always doing their best and earning roles on merit, not just because they’re a woman,” she said.

“I’ve always worked in a female dominated workplace where this has mostly been the case, but Metro North has a growing number of female managers and leaders across different disciplines not because of their gender, but because of their skill set and ability to do the job well.

“In my early twenties I was speaking to one of my seniors about my ambition to one day be a nursing director, she told me ‘yes well, if you keep going as you’re going and as long as you don’t get married or get distracted by kids, you could get there.

“Now I’m a nursing director and I have three sons! Being a mother has not inhibited what I wanted to achieve, and I feel very privileged to have been surrounded by people who supported that.

“Inspired by my mother who was also a successful career woman, my mantra has always been ‘if you don’t try, you’ll never achieve it’, and that’s what I’d like women to think about today.”

So today for International Women’s Day, and each day in the workplace, we celebrate the strong females who make Metro North the fabulous place it is.