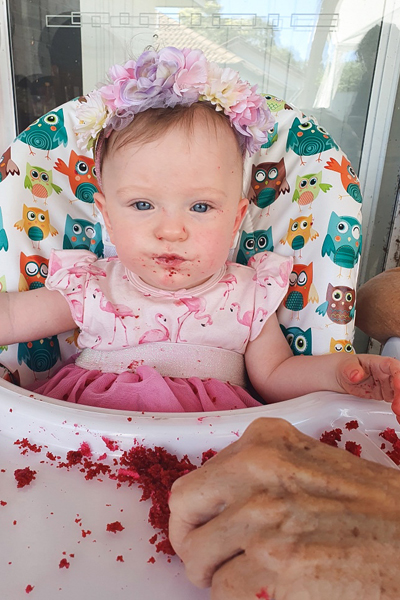 Isabella, born prematurely as an emergency c-section at Caboolture Hospital, was an unexpected early arrival for first-time parents Lisa and Ken Heffernan.

The 650-gram baby was rushed to Royal Brisbane and Women’s Hospital neonatal intensive care unit (NICU) for what would be a 129-day stay for Isabella, born at only 24 weeks and two days on 10 November 2020.

Mum Lisa was told her chances of survival were low.

“The nurses told us Isabella was marching to the beat of her own drum and that all we could do was march along with her as best as we can,” she said.

One year later, a happy, healthy baby Isabella returned to Caboolture Hospital with mum and dad to celebrate her first birthday where her journey began, complete with party hats, cupcakes, and balloons.

“The first four months seemed to last a lifetime but the eight months after have felt like a blur.

“The whole experience was unlike anything you’d expect, it was a little bit nightmarish to be honest – a complete rollercoaster.

“Her lungs weren’t developed enough to cope with her breathing needs for the outside world, it was constantly hit and miss.

“At two weeks she had surgery for a hernia and was on a ventilator for ten and a half weeks until, after three rounds of steroids, she was able to come off it.”

It wasn’t how Lisa had pictured Isabella’s arrival into the world, stating that she and her husband Ken faced a very steep learning curve.

“One minute she would be doing well, the hospital would call us and say they’re going to try and take her off the ventilator, then she’d crash and her oxygen would be terrible – we seemed to constantly be going back to square one.

“Ken and I had to quickly figure out all the terminology, how everything worked, just lots of stuff you never expected to have to know.”

After 129 days Isabella was moved from the NICU to special care where she was able to focus on feeding, gaining weight and establishing breastfeeding with mum.

Despite finally being discharged from Royal Brisbane and Women’s Hospital on 19 March 2021, Lisa was a little nervous to bring her baby girl home but was excited too.

“Walking out of the hospital was very surreal, we stopped three times on the way home to make sure she was okay.

“We’re one of the lucky ones, being able to take a premature baby home, we were so lucky.”