Royal Brisbane and Women’s Hospital (RBWH) has launched NeoHOME, a new service designed to support families of eligible babies in the Grantley Stable Neonatology Unit to take their new family member home two to three weeks earlier than they previously have been able to.

A world-first surgery delivered by Metro North Health in Brisbane will pave the way for women globally requiring breast reconstruction with a safer alternative to silicone implants, leaving them with nothing but their own natural tissue within two years.

Queensland is currently experiencing a COVID surge and our staff are prioritising the care of severely unwell patients. To do this, we have postponed some planned surgery and outpatient care.

Metro North Health is conducting COVID-19 (coronavirus) testing at Fever Clinics and Community Assessment Clinics at a range of locations.

Participants are now being invited to take part in a community-based COVID-19 vaccine immune response study run by a collaboration of health and university researchers.

Researchers at the Royal Brisbane and Women’s Hospital (RBWH) and the University of Queensland (UQ) are trialling a new technology which is set to help epilepsy patients find the best treatment for their condition sooner.

Metro North Health has unveiled a bold new campaign – Health Equity Starts with Me - to drive health equity and eliminate institutional racism across the health service.

Your Voice @ the Royal

Dr David will bend over backwards to help his patients requiring a visit to the RBWH hyperbaric chamber. 🤿 🦪

Dating back to the early 20th century, hyperbaric medicine was originally used to treat divers with decompression sickness or ‘the bends’ as it is commonly known. Now we see plenty of these patients – as well as a range of others including those with vascular conditions or patients needing to speed up the wound healing process.

“The treatment involves delivering 100% oxygen to the patient in a pressurised chamber that is equivalent to two and a half times normal atmospheric pressure,” Dr Kramer said.

“Being in the chamber can feel a lot like taking a short flight in an airplane. Patients need to pop their ears as the pressure increases and spend the next the two hours watching a movie, reading a book or having a snooze, before the pressure is gradually released and they carry on with their day.” 🌊 ... See MoreSee Less

I loved my time as a hyperbaric nurse. Seeing the outcomes was so rewarding!!

Sounds like a good place for a night shift 😴 🤣

Not only is Dr David an awesome Doctor and person but his photography skills are amazing!!!

Shame access is so restrictive, consumers report excellent outcomes with private services who don’t make them jump through as many hoops

Titan the chihuahua recently popped in to visit patient Tonia who is undergoing cancer treatment at #RBWH. 🏡

Tonia and Titan were able to catch up in the hospital's pet friendly area, which is a favourite amongst inpatients, providing a multitude of benefits including decreased pain levels, improved mood, and a healthy dose of feel-good hormones!

“Pets are usually pretty in sync with what’s going on in your body - they can’t talk to you but they can sit on your lap and keep you company and it’s great emotional support," Tonia said.

“It’s a perfect way to take my mind off treatment and the less pleasant parts of the day.” 🐕 ... See MoreSee Less

Animals should be allowed into facilities much more. The power of animals helping with anxiety and depression is very much underestimated. I love this 💕

Great idea. More hospitals should do this.

When I had my treatment they never had anything like this and my family used to have to bring my dog to the Joyce Tweddel Building car park for me to see him. This is awesome and much more suitable👏. What a great idea ❤️

Carol's always had a knack for making things a bit sweeter for those around her. 🧁🍪

She spent much of her working life in a cake and biscuit factory putting together machinery, before she took a chance on a new role 16 years ago - swapping treats for tiny babies in our #RBWH NICU.

Now she keeps the wheels turning on the well-oiled neonatal intensive care unit machine as the ward admin officer.

"It's such a special environment, my favourite part of the role is seeing all the good outcomes - all the little babies who come back every two of four years and you see their growth, it just makes me feel lovely," she said.

I remember Carol from our 5.5month stay in Nicu IN 2019. Wonderful lady as they all are there. 💝💝

Carol, you were always so lovely and helpful during our time in the NICU/special care. Thank you! 😊♥️

Absolute legend 🥇 It is so wonderful to work beside you Carol. You truly put 150% in every single day, and your smile brightens my day every time I see you. Our unit would not run as smoothly if you weren’t there. We love you for the bottom of our hearts 💕 💐 🌹 🌺 🌸

You are an amazing person, a wonderful way to spend your time.

Love Carol!! She was always so lovely when our little one was in the NICU @ RBWH...😘😘

How lucky are they to have you Carol, beautiful inside and out 😘

Thank you Carol you do an amazing job, keeping the wheels on the cart

Such a great lady!!

Carol keeps the NICU train rolling! Nothing is ever too much trouble when we ask. She's always a bright and cheery face to be greeted by. Thank you Carol! 👏

An absolute legend who always has a smile on her face.

We wouldn’t last a day without you Carol! 🤍

Such a wonderful human being. Thank you Carol.

We LOVE Carol - thanks for making our days brighter 😊😊

Hi Carol! It was lovely working with you this year 😁🙏

Thank you Carol for all that you do. As a former Qld Health RN, now retired, I know the important role that you play in the continuity of care of the patients and their families and the support for the whole team.💕

Great lady to work with xx

We’d be lost without you Carol!

In a rare event, both parents had the name Poppy on their lists, so choosing her name was easy. ❤️

"We both said it out loud at the same time - it was meant to be," Dad Nick said.

"We are most looking forward to going home and sitting out on our balcony with Poppy and a cup of tea which over looks our little garden." 🌻

Oh Poppy you are devine! Welcome to the world little one. Congrats to mum & dad!

Congratulations to you both on the arrival of beautiful Poppy! 💗

2nd most gorgeous Poppy I know! The most beautiful one of course is our granddaughter!

Aww enjoy your cup of tea with adorable Poppy 💕

Jen is the network training director for RBWH radiology registrars, and she doesn’t just always see a diagnosis in x-rays and other medical imaging tests!

"I have seen smiling faces with teeth, a stone in a tonsil in the shape of a love heart, a larynx that formed a love heart, and I think the bottom of a brain looks like a panda bear," Jen said. 🐼

Despite the perception that radiologists sit in a dark room and look at scans all day, radiologists are in the background doing some of the most important work, collectively with a broader team that together diagnose, report, and manage cases.

"We unfortunately see so many bad cancers, and there has been times where I have thought there's no way, then six months later they are disease free, which is so incredible. I still have that connection with the patient even though I don't get to meet them." she said. 🫶 ... See MoreSee Less

One of the best!!

Awesome as always Jen, keep up the fantastic work! x

We are all so lucky we have you and other radioligosts ,Thankyou.

What an amazing job, Jen. Thank you for what you do

Its a pleasure to work with you Jen... have learnt a lot from you

Am new here hope a got this lovely new friends 👋 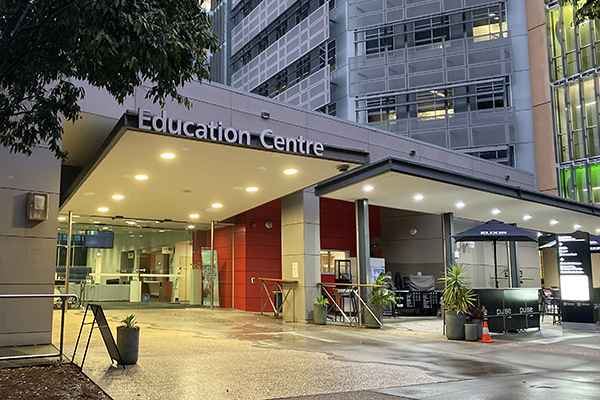 Book your next event or conference at the RBWH Education Centre