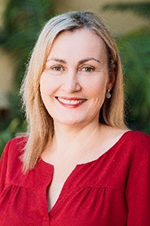 In addition, she has been a Clinical Trial Co-ordinator for more than 30 single and multi-centre clinical trials. She also has over 25 years’ experience in nursing with specialist qualifications in Neurosurgical Nursing.

SURF Trial: This study aims to test the feasibility of evaluating perforated versus non-perforated peripheral catheter design. Cancer care patients requiring injection of contrast via PIVC for a Computerised Tomography (CT) scan for diagnosis or staging of malignant oncology or haematology conditions, will be enrolled.

‘Non-inferiority of low-level versus high-level disinfection for the elimination of bacteria on contaminated transcutaneous ultrasound transducers: A randomised controlled trial’