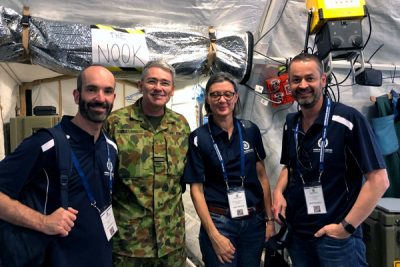 Operation Talisman Sabre is a series of military exercises that focus on the planning and conduct of “high-end” warfare. This year the exercise took place in the ADF Shoalwater Bay Training Area and surrounding state forests, near Rockhampton in Central Queensland.

The Boss Lift exercise is designed specifically for employers of military personnel, so they can experience what their staff do in their military roles, in turn encouraging understanding and support.

RBWH is proud to have many employees who play an active role in the Australian Defence Force. They come from all service lines and all professional streams and include eight full time (ADF permanent) and more than 45 part time (ADF Reserve) personnel. In the past year, RBWH employed reservists have committed more than 4,000 hours of time to their ADF commitments.

RBWH representatives were transported to Williamson Airfield in Shoalwater on a C-17 Globemaster III Military Transport Aircraft. Following their arrival, they spent the day at the RAAF Mobile Level 2 Hospital Facility where they had the opportunity to see Metro North’s military members in action.

Dr Rosengren said it was an incredible opportunity to see our clinicians using their highly developed skill sets in a different environment.

“We were able to gain a better understanding of the crucial role our staff play in the RAAF, as well as the complexities of the organisation,” he said.

“A number of the skills our staff learn in their military positions are transferrable to the RBWH environment, so it is incredibly beneficial for both organisations.