Medicine, motherhood and mentoring at MNHHS

As Executive Director of Clinical Services at Metro North HHS, Irish-born and educated Geriatrician Dr Elizabeth Whiting is one of the most senior female clinicians across the HHS, with a distinguished career spanning almost 35 years.

As Dr Whiting’s five daughters celebrate their incredibly accomplished mother today, they will also celebrate their fiercely independent grandmother – the woman who made sure ‘Liz’ would have the same opportunities as her four sons. 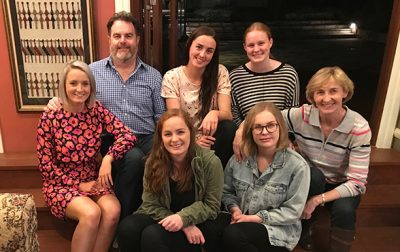 Your mother was a Canadian nurse who ended up in Ireland with her pilot husband, with four sons and you as her only daughter. How did she shape your career expectations?

Mum gave up work when she became a mother because back then there was no such thing as working mothers. I remember her being adamant that I would have a career and that being female wouldn’t put me in a box and categorise my ability to have a career.

She was a very capable, independent woman and she made it clear I would have options as opposed to expectations. I wasn’t really really aware this was unusual until I was older, as it was all I knew.

I remember as a child hearing my mum arguing with my Dad when he’d said that if they didn’t have enough money they would only send my four brothers to university and I’d be the one who wouldn’t go, which I understand now was quite normal at the time.

But my mum was absolutely incensed that my dad would even suggest that as a possibility!

You had an interesting experience in your first years at RBWH as a 27-year-old junior doctor back in the 1980s, after finding out you were pregnant just before taking a written medical exam, which you subsequently failed.

And then you failed your clinical exam as well. What did those experiences teach you?

Seize opportunity. Seize it all. There were so many times I questioned, “Will it fit in, am I the right person, have I got the skills, can I do it?”

And then you do it for a little while and feel really uncomfortable and then after a while you think, gosh this is fantastic!

So after those failures I could have said, “That’s it, I never want to do this again and I’m clearly not good enough,” and yet here I find myself three decades later as an examiner myself.

It’s easy to get a knockback when you’re younger and let it affect you for the rest of your life, but seizing opportunities leads to more opportunities and I always try and remember that when I find myself questioning whether I can do something.

What was it like trying to balance pregnancy and motherhood with work at that time?

You felt like you had to prove your worth – so when I was pregnant I was still doing the same shifts, there was no leniency but nor did I expect it because it was just the way it was.

The first baby was the hardest – that was almost thirty years ago – you took twelve weeks off and that was that, six weeks before and six weeks after.

My last shift at 34 weeks pregnant was one of those 15 hour days and I was absolutely dead on my feet and you didn’t just go and sit down for a moment, you just kept going! I can remember thinking I just could not have possibly managed one more shift.

I had no idea how hard it was going to be coming back though, as a first-time mum and being so incredibly exhausted with no sleep.

So, with a newborn baby at home, I came back to work and was put straight onto night shifts!

You had five daughters over the next decade – how did the attitudes toward mothers in the workforce evolve over that time?

When my eldest started primary school the guilt of being a working mum was so great, however by the time my fifth daughter was born, it was almost as if the mums who were feeling guilty were those staying home with their children, and I remember thinking back to when I used to downplay the fact I was working to try and be the mum that everyone else seemed to be.

It says a great deal about how much pressure there’s been on women over these years, so I love it that we can finally just celebrate the fact that we’re all different and we can all choose what’s right for us and choose the pathway that’s right for own circumstances no matter how that looks to someone else. No more guilt!

How do you feel, now you’re in your mid-fifties and seeing the progress of your own peer group?

It’s extraordinary how many women are in leadership roles across Metro North now, all of whom have made it into their positions on merit.

Even in the most traditionally male-dominated roles we have some of the most remarkable women, many of whom are balancing work and motherhood and all their other commitments. It’s so inspirational.

How did the unusually flexible childcare and kindy options at RBWH at the time help you continue in your career progression, after baby no. one, two, three, four, and then five?

The extended hours at RBWH’s childcare was highly unusual at the time and it was an absolute lifesaver in the years after my night duties when I was back on days.

If I was running late they just looked after our babies and even if it was 6.30 or 7 o’clock they would just bath our babies and take care of them until we arrived, and there are still women now trying desperately to make it to childcare in the evenings on time.

It also meant I could duck over during the day and see my girls when they had morning teas and birthdays and things like that.

It was an absolute lifesaver and I know my experience as a new mum and young mum would have been really different had I not had access to this.

The flexibility allowed me to solve problems – there was a solution. I didn’t have to sacrifice my career or my direction, and without that critical piece in the puzzle, I simply could not have managed both and I honestly can say either I would have had pursued a career or pursued motherhood, not both.

What role has your husband Frank played in this journey?

I’ve been blessed to have a very supportive husband who is an engineer and worked more traditional hours, so between us, whether it was work-related or child-related we managed to cover it all. As you can imagine the commitments in the family were huge and we used to have our flow diagrams for the weekend and either you do this pickup and I’ll do this one and sometimes you’d forget a child here or there!

How did the increase in women in the workforce change the experience for others?

There were so many shared experiences, and sometimes I found myself pregnant at the same time as some of my colleagues or going through similar things. As more women joined the medical workforce the support structures evolved – and it’s not to say that our male colleagues would not have supported us, it’s just that we knew with each other, we’d ‘been there done that’, and, “Ok, now it’s your turn!”

It’s about genuine concern and genuine feeling for each other because we understand what each other is going through.

What would your mother think now, seeing how much you’ve achieved in your own career?

I know that throughout all of this, my children and my family have always been front and centre of what I do, as they always were for my own mother, and I know that if I finished tomorrow or if I died tomorrow, the professional world would keep turning, because where you’re most important is at home.

I’d hate to have missed out on the beautiful family life I’ve had, and I love that my girls are following their own paths and forging their own journeys but are still very much focused on family and home.

So many decades later, my mother’s legacy definitely lives on, as I see my five girls having whatever options they want. They’re all happy, they’re all self-sufficient and my mother would be so very proud of them.