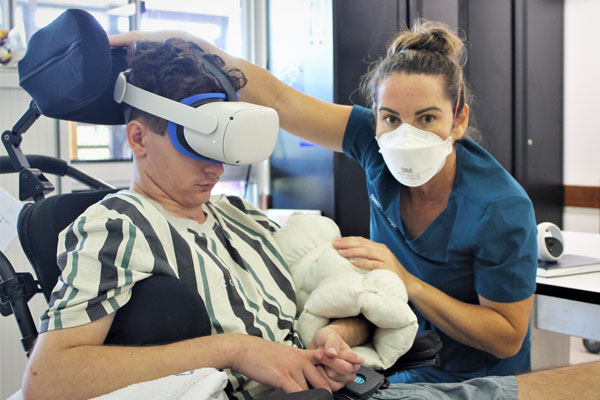 “VR therapies have successfully demonstrated merits in motor and cognitive rehabilitation for patients who have suffered a brain injury, but at the same time, limited evidence exists for the use of VR in communication therapies,” Ms Elliott said.

“An initial pilot of VR technology was proposed following the observation that COVID-19 lockdowns caused a reduction in engagement and decreased motivation of patients in speech therapy.

“The major concern was how patients would tolerate the use of VR therapy without being over stimulated or resulting in elevated indicators such as high blood pressure or heart rate,” Ms Elliott said.

“Six patients used the VR device as part of their usual speech therapy session and engaged with the device better than expected.

“We observed an increase in patients’ speech, engagement and language skills while the VR headset was being used.”

Ms Elliott said at the same time, patients experienced no motion sickness (even with history of motion sickness) and no overstimulation was observed with patients exhibiting stable blood pressure, heart rate and oxygen saturation, and stable mood tolerance.

Through the use of the VR headset, patients viewed a number of scenarios such as sitting on a beach or rainforest, swimming with dolphins, diving, surfing or being on safari.

“The results were highly encouraging, with one patient in particular who is diagnosed with prolonged disorder of consciousness experiencing an increase in movement and alertness during the sessions,” she said.

“This was a very positive increase in alertness for this patient who became responsive and alert, tracking and fixating on the content displayed by the VR headset.

“This patient was observed to smile, move their head from side to side (looking) and move hands when the device was removed. He was previously unresponsive and unable to demonstrate any ability to fixate and track items.”